Are you fed up of tourist traps?

Ibiza, Cancún, Venice, Barcelona or Benidorm are synonymous of summer holidays.
These places have been so successful attracting tourists that locals are starting to suffer the consequences in the form of higher rents and disruptive levels of noise. Mass media marketing is very efficient in convincing people where they should go and spend their cash. So efficient that some places have reached a point of overcrowding, making the holidays less special than they previously were.

For this reason, people are starting to look for alternative holiday locations where their friends have never been.

You may have never heard of a hidden gem in northern Spain called Asturias. This northern coastal region of Spain is stunning. The beauty of its landscapes, as green as southern Ireland, grasslands filled with cows next to paradise beaches and the Picos de Europa mountains, one of the most beautiful places for mountaineers to hike. Asturianos are descendants of the Celts, like the Irish. These far away cousins of ours, over centuries, developed a unique culture due to their isolation and protection from invasion as a result of the high mountain ranges that surround them.

Arenas de Cabrales is the perfect base to explore the east Asturias area and offers a perfect view of the impressive Picos. It is recommended to hire a car or have transport arranged as the public buses only run two or three times a day from the major towns in the coast. 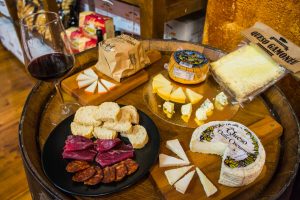 There are forty-two varieties of cheese in this very small region. For cheese lovers, a visit to the Cabrales area is a must. They produce a wide range of cheese, the most popular of which is the Cabrales cheese.  It is a strong blue cheese made from raw cow’s milk and a mixture of two or three kinds of milk, cow, goat or sheep. The maturation process takes place in natural caves, in the Picos de Europa mountain, where the humidity is 90% and the temperature ranges from 8-12 degrees Celsius. Under these conditions, mushrooms develop in the cheese which gives it the blue-green colour. This process usually last two to four months, during which the cheeses are covered with moistened maple leaves and their position is regularly changed in the cave to season them throughout.

When it comes to food, Asturias can offer a distinctive variety. As well as the famous cheese, Asturias has in “Fabada or Fabes” their star dish. It is a rich stew, consisting of large beans, chorizo, black pudding and pork. It is delicious and is available throughout the region typically with the ‘menu del día’ which offers exceptional value for money as it includes two main courses, dessert, drink including wine and bread. Alternatively, you can choose their seafood version, with “almejas” which is Spanish for clams. 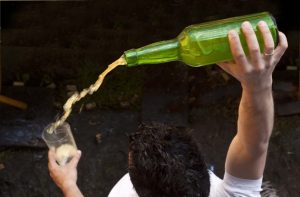 Another distinctive cultural aspect of Asturianos is their love for cider. While in Rioja they prefer red wine and in Galicia they tend to favour white wines, in Asturias, cider is the favourite drink for locals. Waiters will pour the cider with their arm stretched high and pour it in a slightly tilted glass without looking. This technique has its own name in Spanish - “escanciar”. The aim is to oxygenate the cider as it falls from a height into the glass, increasing its flavour. Also, cider is drunk differently from other alcohol. It is drunk in small glasses and in one gulp, right after the waiter, or yourself if you have the courage to try the technique, pours the cider into the glass. If you are keen to experience this, look for a “Sidrería” or cider house. There are as many in this part of Spain as there are Pubs in Ireland! 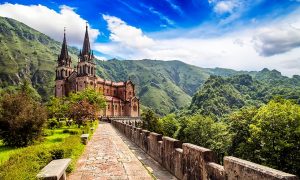 Asturias not only has its unique food and drink compared to other parts of Spain, it also has its own language – ‘Bable’. Unfortunately it is rarely spoken today as the Castilian/Spanish is the dominant language. For those who have a good command of Spanish, you will appreciate how Asturianos tend to change the endings of the words. For example, it is very common that “o” is replaced with an “u” and the “a” is replaced with an “e”. If you can’t distinguish this, pay attention to road signs with the names of towns. The local people are fond of re-writing the Government signs with the “correct ending”!

During their summer festivals you will have the opportunity to see men and women dressed in traditional Asturias outfits while they dance to the sound of bagpipes. Other traditional instruments from this region are the square tambourines, consisting of a square wooden frame on which transversal strings of gut are tied as a snare, covering the whole set with tight skin. A more refined instrument in Asturias is the Rabel, similar to a violin, which was introduced by the Arabs and reached its peak of popularity during the Middle Ages. 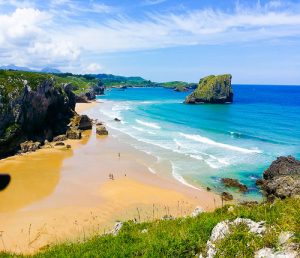 When it comes to natural beauty, Asturias is second to none. The cliffs on the coast and sandy beaches are never overcrowded. Up in the mountains, 1,100 meters above sea level you will find beautiful lakes surrounded by mountains – called the Covadonga Lakes - which resemble those in Switzerland. Before you arrive to the Lakes area, make sure you stop in the Sanctuary of Covadonga, with its beautiful Basilica and the Church-Cave of the Virgin of Covadonga. Since 737, this is the resting place of the King of Asturias Pelayo, one of the most renowned kings for Spain as he was the person to start the Reconquest of the Iberian peninsula from the Arabs. 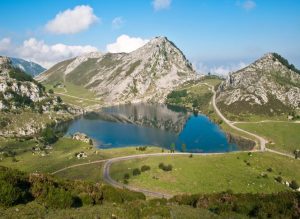 If you want to experience a different side of Spain, Asturias is a little gem waiting to be explored. Magic Hill Holidays is an Irish company that organises Camino walking holidays in Asturias and Cantabria on the Northern Way and can help organise your trip for convenience.

Popular posts from this blog

December 21, 2018
A 14-year-old and his aunt find there is no fixed path on the Camino, or in life, on a walk from Santiago to Finisterre Bronagh and Kyle on their Camino 14-year-old Kyle O’Neill was expecting to walk the Camino. What he wasn’t expecting was the envelope I handed him. Inside it was a sheet of paper. On that, were three instructions. First, Kyle would be responsible for managing his own money during the trip. He had a daily budget of €30 and had to make decisions such as where to stay and where to eat along the route. Second, he had to talk to people from ten different countries and learn at least two interesting things about these countries. Third, he had to practice Spanish, which he is learning at school, by talking to local people while ordering food or booking into accommodation along the way. Kyle was intrigued. Reading every line carefully, he looked up at me, smiled and said: “Wow Bronagh, I was not expecting this but... Bring It On! Ky
Post a comment
Read more

December 21, 2018
How pilgrims benefit rural communities  The last World Trails Conference took place in Santiago de Compostela in September 2018. There were many lessons learnt during the three day event but only one that inspired the article you are    about to read. Why should we promote active walking holidays such as  The Camino de Santiago?   The Camino is growing more popular as it helps you reconnect with nature and rural areas which we have distanced ourselves from over the last fifty years due to our busy city lives and the advancement of technology. This separation from our natural way of living a thousand years ago is causing a crave for nature and we are embracing the idea of exploring our inner selves while enjoying an active walking holiday. This is the Slow Tourism model, a form of responsible travel that has deeper economic implications that you may think. Let’s explore them! Promoting this type of holiday over traditional beach holidays (Mass Tourism) has a major impact
Post a comment
Read more

Kindness on the Camino: My three lessons from the world's greatest walk

June 04, 2018
There are three dimensions to the Camino, says Bronagh Carroll, and a little magic in each... Bronagh Hill of Magic Hill Holidays Bronagh Carroll June 2 2018 1:00 AM   How can walking up to 30km a day on a muddy trail with a heavy rucksack on your back be magic? Let me tell you. You've probably heard about Spain's Camino de Santiago de Compostela from friends and strangers alike. You may even have been tempted to try it once or twice, but pushed the notion to the back of your mind, thinking: 'The Camino is not for me' or, 'I'm not that kind of person'. Well, the Camino  is  for you. The Camino is for everyone. That's the beauty of this walk. I know it can be scary to go out of your comfort zone. But you are never one simple number on the Camino - except for at the tourist office, of course. You form part of other people’s Caminos as much as they form part of yours. There are three
Post a comment
Read more